Back in April 2010 i was first approached by the lovely people from 580 to take part in a tour promoting Becks Vier as part of their ‘Music Inspires Art’ campaign. It involved about 8 dates nationwide showcasing my AV show and drinking the odd pint. (all in the name of promotion of course) 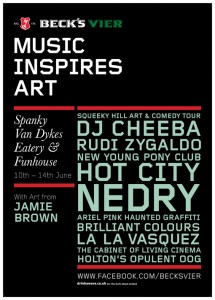 Leeds, Nation Of Shop Keepers – May 20

Following this i was approached by marketing company Outsideline who wanted to confer with me about an ad concept they had been working on… a few meetings followed and im pleased to say the shoot and outcome have turned out really well. The ad has now spread like wild fire all over the net and i’ve been greeted by comments about my “frothy lip” by people all over Bristol.

So, here it is… check it out, let me know what you think. I’d love to hear your comments

*Oh, and make no mistake, this is not a viral ad full of post production trickery… the beer fonts really were engineered very cleverly to trigger music stems and samples!