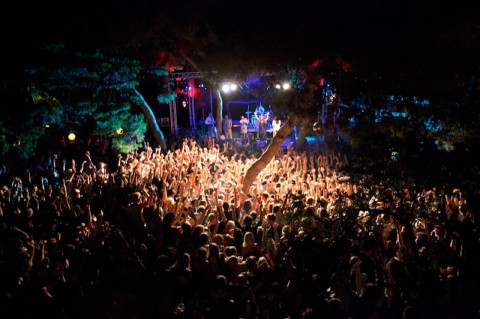 GBC Mag asks DJ Cheeba some questions following his return to Soundwave Festival and what thing’s he will be throwing in the mix this time round!

As your heading out to Soundwave festival in Croatia this year, what are the crowds going to expect from you, or is that a complete surprise?

My shows this year will be different of course. I have been working on a funk 45s breaks mix over the last month so will be airing some of the ideas from that on the boat and on the beach. Kind of a lesson in drum breaks so sit back class… its learning time. The AV show is always changing and this year I have some dope new edits to debut that are going to melt some minds for sure.

Have you played many festivals before? I can imagine the choppy visuals with the sound being a really intesting mix in that environment…

As a resident DJ for Soundcrash, I’ve been lucky enough to be part of Soundwave festival since day 1 and can’t wait to return again! The AV stuff can work really well and reach out to people’s nostalgia and talk to them on another level. It’s important to keep focus on the music though as this is what people react to most and what makes them jump.

Who else would you like to see while you’re over in Croatia?

Ah well, De La Soul of course will be amazing. From hearing classics from 3 Feet High to the latest single ‘Must Be The Music’ you just know its going to be pretty special. Other acts im keen to see are Part Time Heroes who have a stunning album out, craig charles – the most enthusiastic dj you ever saw, Kentaro (im convinced is from the planet ‘turntable’) and of course festival favourites; Mr Thing, Yungun and Alexander Nut.

Awesome, have you ever experienced any complications video and music editing live? Does it require your full concentration on the night?

oh yeah, there is usually an issue or two to keep me on my toes. i dig the challenge though, i would feel much more uncomfortable just playing full length songs and dancing around. i need the tech to focus on so i feel at ease.

And with you being a DJ from Bristol, do you find yourselves being influenced by some of the other big names coming out of the city? Eats Everything, Julio Bashmore, Bowski…

Bristol is famed as a hot bed of music and art and i think its hard not to be sucked into that and feed off it. It’s great to see people like Julio blowing up, the world needs to realise there is so so much more here than Portishead, Roni and Massive Attack here!

That’s true! Did you begin your career just on the decks or have you always been interested in mixing video with sound to give a completely different experience?

I weirdly was studying video production as a teenager at college when i first picked up turntables. I never dreamed i would be combining the two 15 years later! I definitely would say my styles come from my love of turntables and cut and paste music though… I’ve been playing with decks for all of my adult life and the video thing only blew up for me when the technology arrived to combine the two a few years ago.

Visuals are becoming all the more popular as technology has advanced, do you think video editing will become a trend with more DJ’s in the future?

I think video is bonus element for sure. it allows the DJ to talk to the audience on another level and obviously is a more involving experience. I’m not convinced it will be the norm as music continues to be the driving force in any DJ show but it’s certainly more than a novelty and something that continues to blow minds.

What other plans have you got coming up this year?

As I mentioned before, there is a funk/disco 45s breaks lesson in the works with a couple of other DJs. As for video, I’m continuing to work on a crossbreed documentary thing. It’s been on the back burner for years and now I’m starting to wrap my head around the huge amount of sampling and cataloguing involved. It’s a big one and hopefully will be received as so much more than an AV mixtape.

Thanks DJ Cheeba for talking to us!